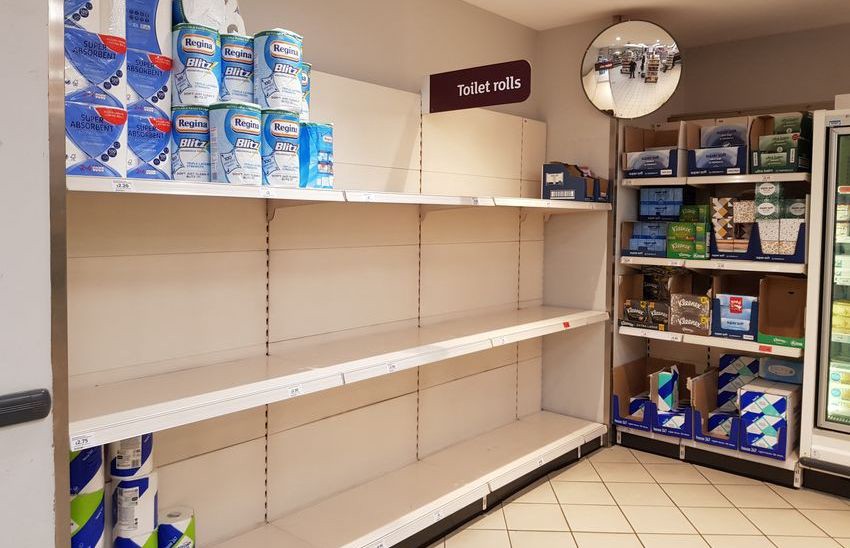 These are the times that try men’s bowels — at least if the toilet paper aisles of the supermarket are any guide. In years to come, tales will be told of the Great Bog Roll Run of 2020, of the days when fear of an imaginary shortage created a real one. Historians will chuckle over the photos of shoppers with trolleys full of toilet paper, as if hoping to placate some faecal deity. The government really must have failed in its efforts to inform the public, given the apparent widespread belief that the Coronavirus is primarily a threat to their arseholes.

Turning to the news, (perhaps struggling to see over our mountains of Andrex), we find it’s our least serious Prime Minister whom history has chosen to inform us that our elderly relatives are toast, or as he so brightly phrased it, “many more families are going to lose loved ones before their time”. At least he didn’t start flailing his arms and promising to “Get Covid Done”. (Perhaps they’ve locked Dominic Cummings in a cupboard.) Though it’s a curious thing about Mr Johnson that even when breaking the grim news about Grandma he doesn’t seem to connect the words with the meaning, and looks as if he might at any moment break into a smile.

If the country’s political opposition has anything to say on the matter, no-one has noticed. This is probably just as well, given only a True Believer can seriously wish a paranoid dunce like Mr Corbyn were in charge right now. He’d probably be vowing to “fight this Tory Covid” and replace it with a “jobs-first” virus, if only the Zionist media would stop being mean to him. (Seumas Milne, meanwhile, would already have accused rich peasants of hoarding tins of baked beans.) Perhaps Jeremy and his fans can finally live out their dream of noble irrelevance, now the PM has effectively placed the 70-year-old Mr Corbyn under house arrest. (“It’s for your own good, old chap. You understand.”)

And so much for populism! The public mood, at least for now, appears desperate for experts, politicians, and various other elite-types to tell us what to do, and ideally to “lock down” the country asap. From attacking the Westminster bubble, people now want to live in one, preferably with access to Netflix. And what of Brexit? How pathetic our squabbles over “sovereignty” look now, as if we could hold a referendum and vote against the free movement of germs.

Instead we’re infected with a cocktail of shady euphemism: “Self-isolating” for staying at home alone; “Social distancing” for staying the hell away from other people; “herd immunity”, with its delightful image of people as cattle. My new favourite is “depress the peak”, a process one feels is well underway.

All of these terms (along with the nervous jokes on Twitter) serve to obscure what everyone knows to be true, namely that no-one, not even the supposed experts, really knows what will happen next or what to do, and that everyone is, in a word, scared. Is it any wonder people rushed to the shops to try and save their own arses?

How to describe the feeling? The world has at the same time become bigger and smaller: Bigger in that it suddenly matters what happens in, say, a previously unknown region of eastern China; smaller in that the space to move and live freely is shrinking, the air we breath is now suspect, and other people are a potential threat. Or maybe we are the threat, carriers of a plague we don’t even know we have. Add to this, concern for the old and the infirm, (whose deaths in some number we are asked to take as a given), the prospect of financial ruin, and the sense that this could all get much worse very quickly.

Self-regarding (I almost said “hand-washing”) comparisons to the Blitz are silly, and a bit much when people in Idlib, Syria, are being killed by real bombs, not 80 years ago, but now. (I see that the dictator and eye-doctor Assad, despite claiming no Covid cases in Syria, has suspended the school term, though not, of course, the bombing.)

And if you think things are going to get hairy here, imagine living though a Coronavirus outbreak in a refugee camp. Some people don’t have to imagine. (Incidentally, anyone interested in how Covid-19 is affecting the world’s most vulnerable workers can visit this page run by my colleagues at the Business and Human Rights Resource Centre.)

All that said, we do suddenly find ourselves in a world of travel restrictions, emergency powers, and scarcity — conditions we like to think will be temporary. (Again, one hears a dark laugh from the refugee camps.)

If there’s one lesson to be rescued from all this, it’s the utter folly of tribalism, and of imagining that walls, whether physical or mental, will keep us safe. Microbes don’t recognise differences of ideology, nation, or class, or ask for your papers at the border between health and sickness. They will afflict anyone, from an elderly woman in Wuhan or a migrant worker in Qatar to a Hollywood star on holiday or the Prime Minister of Canada. The Coronavirus shows we really are all in the same boat, (though some of us have better seats).

Perhaps both within and across borders it might finally be time to think more about society, and about dignity for everyone, rather than about how best to stockpile our home and polish our backside. Now, if you’ll excuse me, I have some hand-sanitizers to steal.