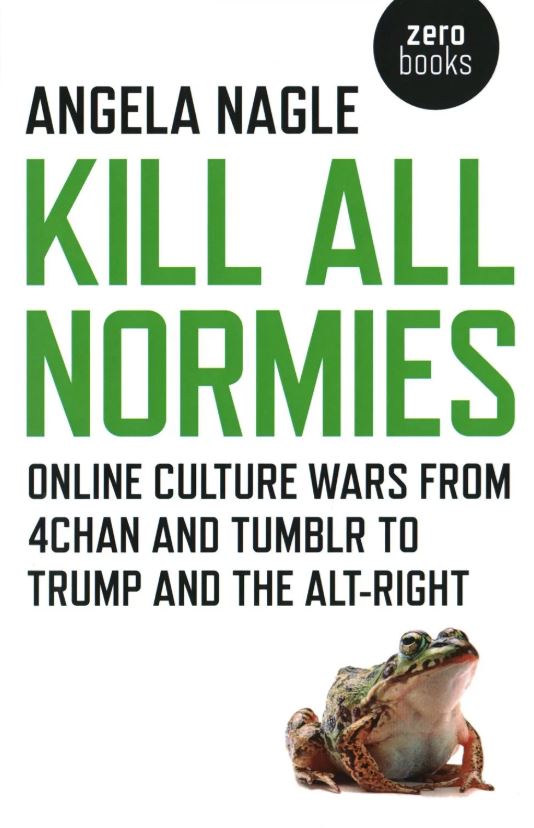 Review of Kill All Normies by Angela Nagle, originally published in Medium on October 19th, 2017.

Is there something about the internet which brings out the worst in people? It’s a question one has reason to consider every day. But a new book by Angela Nagle makes an equally troubling argument, namely that politics has brought the worst of people out of the internet.

As full-costume Nazis and Klansmen march through the streets of Charlottesville, Virginia, and America’s Twitter troll president argues the toss about whether they might have a point, Kill All Normies traces the smell back into the sewers of internet subculture, and forces some useful distinctions on our black-and-white public debate.

In the book, Nagle suggests that the great internet-powered movement we were told would materialize back in the days of Occupy has finally arrived — only it’s a movement of the extreme right, and one which makes up an essential plank of the Trump coalition.

Against the tendency to group all these online “deplorables” together, Nagle takes care over the shades between the fascism of the alt-right (as showcased in Charlottesville) and what she terms the “alt-light” — a more frivolous and vague milieu with only marginal interest in uniforms and hoods.

The book enlarges on a piece Nagle wrote for The Baffler in March 2016 called ‘The New Man of 4chan’, a fascinating excavation of the seedy online world of self-styled “beta males”.

These repressed and resentful meme-warriors have made a sport out of supposedly ironic misogyny and racism, (by “ironic” they mean “just kidding”), and see in Donald Trump the ultimate foe of political correctness.

This doesn’t make its politics any less reactionary. If anything, it makes it worse — a movement “full of the old bigotries of the far right but liberated from any Christian moral constraints by its Nietzchean anti-moralism”.

The chief merit of Nagle’s book is to place this tendency in the context of the history of ideas, and provide an intellectual backdrop by which to view it, instead of merely a powerful spotlight.

This involves a necessary reckoning with a counterpart online subculture on the left — the check-your-privilege, trigger warning, safe space brigade, whose cartoon radicalism and heresy hunts, Nagle writes, have “made the left a laughing stock for a whole new generation”.

This chunk of the left has been a helpful foil for the online right, and the two movements have nurtured each other, and managed to export their online culture wars into mainstream politics.

Nagle is admirably generous about both factions, recounting their fatuous exploits with impressive restraint. This allows the material to speak for itself, and is a stylistic rebuke to the breathless rectitude of the Twitterati.

Her carefully developed analysis is no less explosive for its thoughtful delivery. Faced with a puritanical left and a taboo-busting right, we’re invited to question our basic assumptions.

As Nagle writes: “The ease with which this broader alt-right and alt-light milieu can use transgressive styles today shows how superficial and historically accidental it was that it ended up being in any way associated with the socialist left.” This is good stuff, and more provocative than anything you’ll read on Breitbart.

She goes on to suggest that the politics of cultural rebellion has been a failure, and proposes that those, like her, on the socialist left, should dump it in favour of something less easily co-opted by everyone from “the president’s fanboys to McDonalds”.

The book could have benefited from closer editing to avoid a few lapses in clarity and the odd repetition. Some sentences are too long and busy, and small changes would have made the internet lingo more accessible for a general audience.

But Kill All Normies is a tonic to much of what passes for political analysis today. A haven of research and reflection in a blizzard of unsorted information, this book gives shape and form to ideas and movements so prevalent that they are difficult to see.

With humourless clowns to the left of her, and Heath Ledger-style jokers to the right, Angela Nagle brings a cool seriousness to a phenomenon we laugh away at our peril.