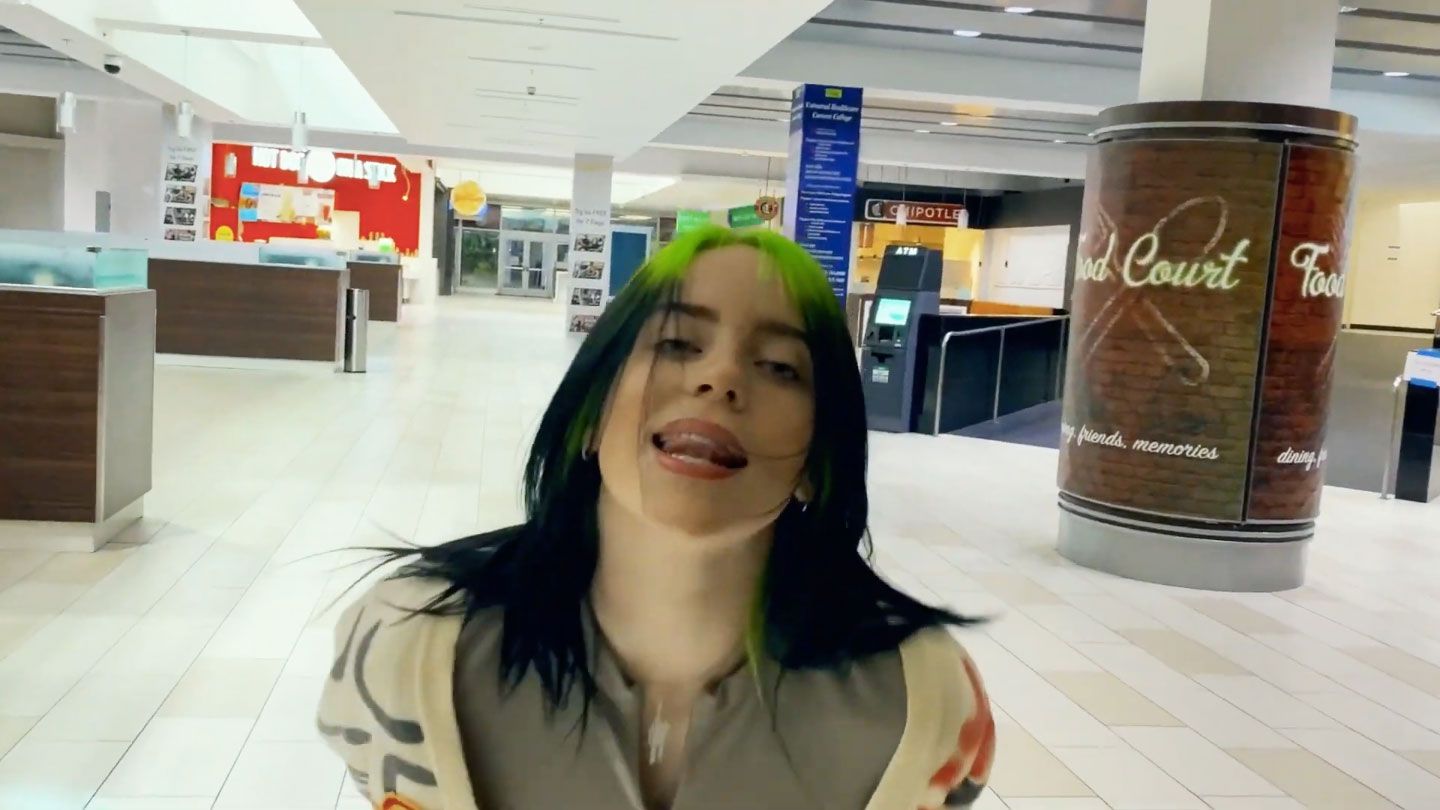 write that you remain unremarkable”

The above is the best line in ‘Therefore I Am’, a new single from the sister-brother musical team of Billie Eilish and Finneas O’Connell, released on Thursday. What’s “remarkable” about the song is that it’s their first to show signs of playing it safe — and of missing the mark.

Despite a suitably mischievous video, where Eilish lords it around an empty shopping mall, the song itself is a plodding rehash of ‘All the Good Girls Go to Hell’, but without the swing or depth of the original. Instead of interplay between melody and instruments, the hook of ‘Therefore I Am’ clings to the bassline. There’s little variation from talky verse to repetitive chorus. And the song ends with a beeping riff that sits perfectly over the post-chorus keyboard part in ‘Bad Guy’. The resulting song is catchy in a dull way, like a jingle, and doesn’t reward repeat listens.

The lyrics are a middle finger to somebody, and have all the attitude fans could want. But they lack Eilish’s usual precision and wit. Consider the opening lines of ‘No Time to Die’, from earlier this year: “I should have known / I’d leave alone. / Just goes to show / that the blood you bleed is just the blood you own.” She packs so much into short lines with monosyllable words, and the results are a musical bomb waiting to explode.

It would be unfair to compare a ballad with a bop. So here’s the chorus of ‘My Boy’ from the Don’t Smile At Me EP, which is similar to ‘Therefore I Am’ in style and theme: “My boy (x3) don’t love me like he promised / My boy (x3) He ain’t a man and sure as hell ain’t honest.” Notice how deftly she tells the story, and also the rhymes within the line (“love me like he”), as well as the satisfying resolve of “promised” into “honest”.

Turn now to the hook of the new song: “I’m not your friend, or anything, damn / You think that you’re the man / I think therefore I am.” Here we get thudding masculine rhymes (“damn, man, am”) in a lazy conversational stanza. There’s none of the storytelling of ‘My Boy’. You hardly care whether she’s doing something clever with the quote from Descartes — and to even wonder means the lyric isn’t working.

When you move to the verses, the difference is more glaring. Take the first verse of ‘Strange Addiction’ from the debut album, When We All Fall Asleep, Where Do We Go? (2019). It’s in three parts: 1. “Don’t ask questions / I don’t wanna know / Learned my lessons / way too long ago. / 2. To be talking to you, Belladonna / Should have taken a pause not an Oxford comma. / Take what I want when I wanna. / And I want ya. / 3. Bad bad news, one of us is gonna lose / I’m the powder, you’re the fuse. / Just add some friction.” Not a syllable is wasted, and the music in the verse jumps off the page.

Now try the verse of ‘Therefore I Am’:

“Stop, what the hell are you talking about? / Get my pretty name out of your mouth. / We are not the same with or without. /

Don’t talk about me like you might know how I feel / Top of the world, but your world isn’t real. Your world’s an ideal.

So go have fun. I really couldn’t care less, and you can give him my best, but just know…”

The first stanza has a good quip (“Get my pretty name out of your mouth”), but it’s sandwiched between one line that is too colloquial and one that is too cryptic. After the second, lamer stanza, we have a run with a nice ricochet (“couldn’t care less … give him my best”), but the word “really” is just filler, and comes soon after “real”, which is careless when she was going for insouciant.

The lyrics pick up in the “Article, article” section I quoted above, before we return to the hook and an anaemic bridge: “I’m sorry, I don’t think I caught your name.” That supposed knockout is then repeated, before we’re back to the chorus.

All of this is more stark when you compare ‘Therefore I Am’ with the recent Eilish singles ‘No Time To Die’, the boldly sparse and seductive Bond theme that builds to a crescendo, and most recently ‘My Future’, a jazz ballad that jumps into a hip-hop groove. Against these, ‘Therefore I Am’ is a real step backwards — Billie by-numbers — while also a decline in quality from the album and EP.

That said, fans will probably love it. The song has the basic elements of a Billie Eilish track, if not the standards — and this raises a question: When you get everything you wanted, where do you go? Seeing Eilish with her arms full of Grammy awards in January, one felt a similar pang as when Fleabag and Killing Eve creator Phoebe Waller-Bridge was being garlanded last year. They both must know this can’t last forever, and that the next thing they try might fall flat. So they are faced with the question of what sort of artist they want to be.

What makes Billie Eilish so thrilling is her originality, her courage, and her ability to surprise. All artists have to decide whether they will go the Rolling Stones route of churning out the same crowd-pleasing material (with some stretching) or the David Bowie road of taking risks that might alienate fans, or simply fail. The hope is that even if the artist fails, they fail interestingly, and evolve. By contrast, ‘Therefore I Am’ sounds like someone tried to make a Billie Eilish song, and fell short. This reviewer hopes she and Finneas build on the promise of ‘No Time to Die’ and ‘My Future’, and go back to not trying to sound like themselves.