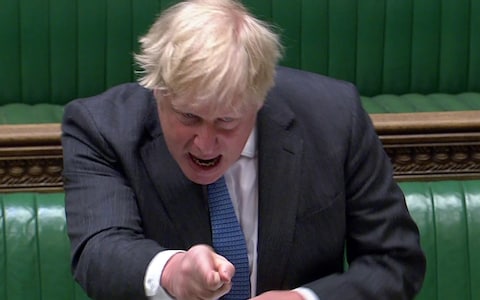 Watching Boris Johnson’s temper tantrum at this week’s PMQs, I was struck by the thought that I’d seen this before. In a video clip from November 2014, the then Mayor of London responds to some mild heckling from Andrew Dinsmore, a Labour member of the London Assembly, by barking: “We have a budget — We have a budget THAT DOES MORE FOR YOUNG PEOPLE IN THIS CITY THAN YOU’RE PARTY EVER DID!”

Dinsmore replies: “Now, now, temper, temper.” You have to watch the footage to get the full effect of Johnson clearly losing control: the words flying out, the glaring eyes, the petulant tone and Etonian growl on the word “ever”.

Johnson biographer Sonia Purnell has noted his ability to “change from bonhomie to a dark fury in seconds”. In a piece for the Sunday Times in 2019, Purnell cites Johnson’s banging on tables and swearing around his House of Commons secretary, and his cursing at a Telegraph sub-editor down the phone, after the editor Charles Moore rejected a column Johnson had filed late. (The power relationship in both these examples is not incidental.)

Outbursts like this might seem out of character for a politician known for his good humour, which veers from disarmingly charming to shockingly unserious. But in fact Johnson’s humour and his anger are of a piece. While his foolish wordplay (“a farrago of nonsense” etc.) might seem ironic and self-deprecating, it’s really at the expense of the listener: a way of saying “Fuck you, I’m not bound by your rules”. And it’s no coincidence that he employs this humour when he’s up against it or being asked awkward questions. At root, both his humour and his anger are expressions of conceit, and responses to a perceived loss of power.

As Purnell writes: “A terrifying mood change can be triggered instantly by the slightest challenge to his entitlement or self-worth.” Johnson resembles a sketchy (and in some ways more civilized) version of a character from Nabokov: the pseudo-intellectual, or artist manqué, who believes he can bend the world – and other people – to his will. (Johnson as a boy dreamed of being “world king”). In Nabokov’s fiction we see how personal conceit can licence cruelty to others, including through the darker shades of laughter. One thinks of the way that great pseud Humbert Humbert mocks his child captive and victim, Lolita. For all their supposed culture and affability, such characters can’t handle any crack in their self-image, and behind the mask harbour an easy resort to violence. Consider the pompous bourgeois Albinus in Laughter in the Dark, who, having been humiliated for sport, knows at once that the correct response to his partner’s infidelity is murder.

Of course, Johnson has never indulged in such extreme criminality, (though he did once promise to help a friend beat up a troublesome journalist). But the psychological profile seems to fit our Latin-quoting Prime Minister, with his tone-deaf jokes, his thin-skin, his narcissism, and his casual attitude to human suffering. (I can’t help but note Johnson’s tendency to charm, impregnate and then discard the women in his life. The potency asserted there is somehow mirrored by the vulnerability of having your dirty linen – or in this case, brand new curtains – aired in public.)

When Johnson joked, as he did while foreign secretary, that post-civil war Libya could be a great place to do business once they “clear the dead bodies away”, you see the cruelty behind the smirk. If it turns out to be true, as alleged, that Johnson said he would rather see “bodies pile high in their thousands” from Covid than impose another lockdown, I submit it makes very little difference morally whether he did so out of anger or he was trying to be funny.

Where Humbert Humbert had “the fancy prose style of a murderer”, Boris Johnson has the sense of humour of a bully. And like all bullies, Johnson can dish it out, but he can’t take it. That’s why being publicly mocked by Keir Starmer this week about who really paid for his curtains made the PM lose his mind. Starmer’s photo op at John Lewis appears to have had a similar affect, judging by the tone of the government’s response. If Starmer keeps this up, and uses his own capacity for humour (a weapon his predecessor notably lacked) to expose Johnson as more of a thug than a clown, he might turn out to be the right man for the job after all.