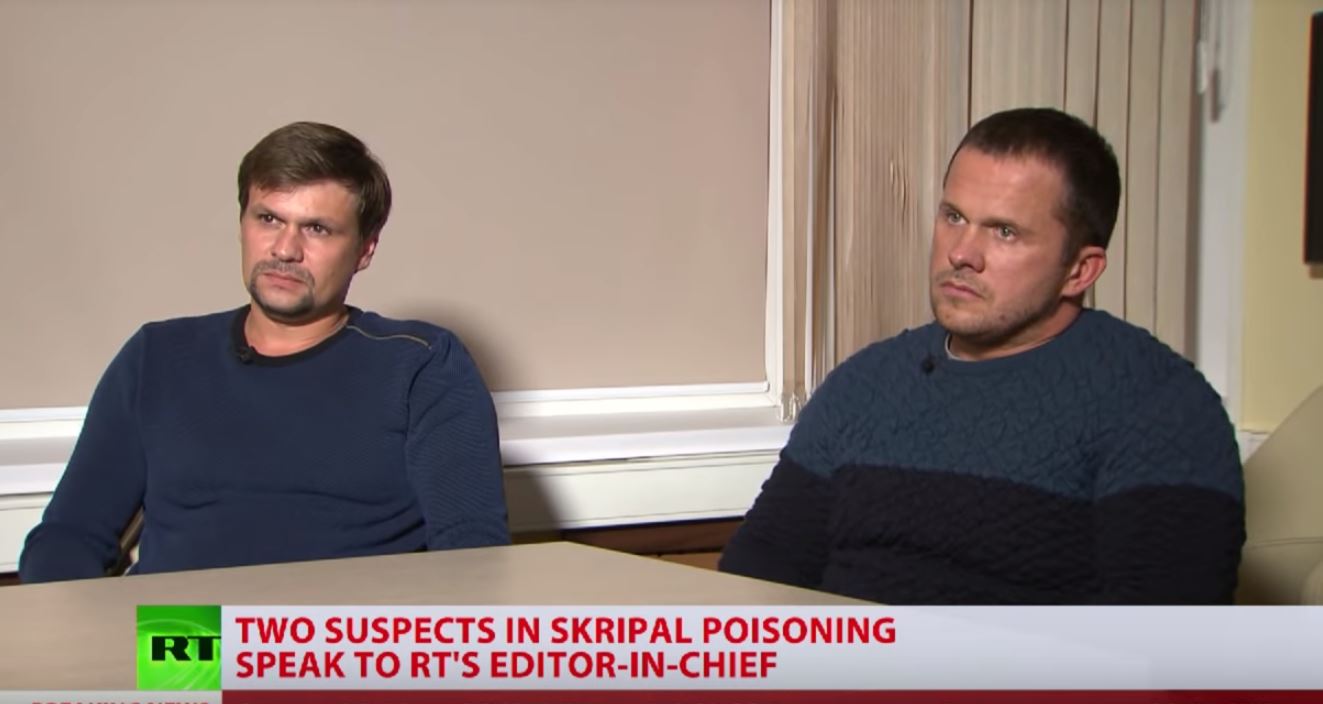 It’s easy to laugh at the pathetic cover story offered by Russian heavies Alexander Petrov and Ruslan Boshirov for why they were in Salisbury at exactly the same time a former Russian spy was being poisoned with a deadly nerve agent. In Britain, their interview with Kremlin outlet Russia Today, in which the GRU agents claimed to be Cathedral enthusiasts on a jolly, was a source of great mirth, as if disinformation about a state-sponsored murder plot was just another funny internet video.

This has obscured the serious nature of their crime, which put four people in the hospital and a fifth underground. Yet even without this interview, the collective response to the Salisbury attack has suffered from a parochial sensibility, and a refusal to try to consider the incident with the whole world in mind.

For example, it takes a moment to notice that the goons who unleashed Novichock in Salisbury work for a man who is helping drop chemical weapons on Syria ,  where the target is not one former spy, but towns full of civilians.

Yet there is a constant failure in what passes for public discourse to connect Putin’s crimes in the West with his far greater atrocities in the Middle East. A strong editorial in the Observer last week, which blames Putin for the Salisbury attack, does not mention Syria once. This in the most liberal-left and international-minded newspaper in the country, and at a time when Putin and Assad are making plans for Idlib.

Similarly, Democrats in the US will denounce Vladimir Putin for his “attack on our country”, by which they mean Russian interference in the 2016 elections. They will sometimes mention the way Putin’s Russian critics all end up dead or in jail (or both), and they occasionally remember to cite his invasion, annexation, and continuing war of aggression in Ukraine. You have to go quite far down their list to find Putin’s “propping up” of the filthy Assad regime.

It’s worth restating what this “propping up” entails, since for some reason it’s rarely laid out. Russia’s policy in Syria involves the use of arms sales, Russian troops and warplanes, Western-facing propaganda, and veto power on the United Nations Security Council, to keep the war going and the dictator murdering. (They are aided in this by the blood-stained theocracy in Iran.) Russian aircraft have targeted Assad’s enemies, both military and civilian, with only 14 per cent of Russian airstrikes aiming for ISIS, and Russian forces deliberately bombing Syrian hospitals.

While this charming axis can murder just as well using conventional weapons, it wouldn’t be fascism without that extra twist of sadism. For Assad this means barrel bombs, cluster munitions, and chemical weapons, (the latter having last been used on this scale by that other Baathist tyrant, Saddam Hussein). Putin has enabled Assad’s chemical addiction, even letting Syrian planes set off from Russian-controlled bases with their poisonous payloads.

This raises a question: Would the Salisbury Novichock attack have happened if Putin had not made fools of the western powers over Assad’s chemical warfare? (Recall in particular the farcical response by Britain and America to the 2013 chemical attack in Ghouta. And the equally farcical Putin-led “deal” to destroy all of Syria’s chemical weapons, which the Organisation for the Prohibition of Chemical Weapons declared complete in January 2016. You’ll notice the chemical attacks have continued, most famously in Khan Sheikhoun, Idlib, in April 2017, which prompted a token airstrike by President Trump.) One can’t shake the feeling that the two things were connected in Putin’s mind.

Indeed, why use chemical weapons at all – whether to whack an ex-spook or empty a town – other than to send a message? In both cases, the weapons serve to scare people, and to show who’s boss. Putin and Assad also know that the punishment, if there ever is one, won’t fit the crime. (What, in any case, would be a fitting punishment for dropping chemical weapons on children?) The message being sent is this: The forces of tyranny are stronger than the forces of liberalism and democracy.

From here we can see both Salisbury and Syria as front lines in the same global conflict. For all the brave talk we’ve heard lately about “standing up to fascism”, the world has watched Putin and Assad turn one Syrian city after another into Guernica. Our neutrality has not kept us safe. It has only empowered our common enemies – the dictators, terrorists, and demagogues.

Today, Assad is looking to crush the people of Idlib, a million of whom fled there from the cities he has already bombed. Putin’s media outlets are floating conspiracy theories in case Assad decides to use chemical weapons. (The Labour Party, led by the great humanitarian Jeremy Corbyn, has signalled its plans to reject evidence of any such attack, and to obstruct any British military response.) Meanwhile, another Putin critic, Pyotr Verzilov of Pussy Riot, has been taken ill in a suspected poisoning.

So we find we have to learn again the old lessons: fascism is not restricted to “a quarrel in a far-away country between people of whom we know nothing”. Russian imperialism has designs for us however “McCarthyist” it might seem to point this out. It’s long past time we stopped asking for whom the bell tolls.