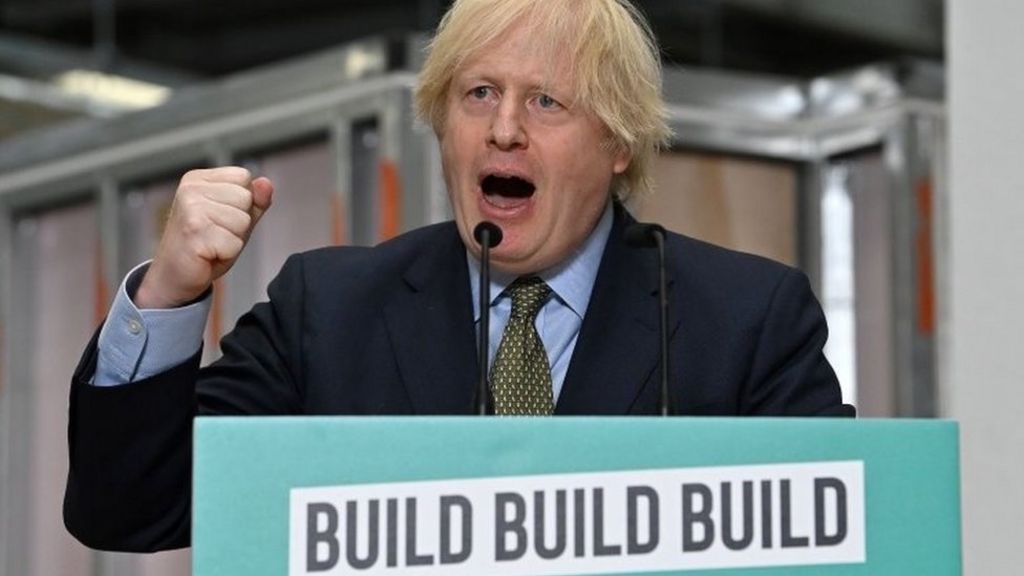 For those who found the slogans “Take Back Control”, “Get Brexit Done”, and “Stay at Home” too challenging, this government has just the thing. A triumph of brutality, the Prime Minister’s recently unveiled slogan “BUILD, BUILD, BUILD” has all the charm of an infant smashing toy blocks together. This makes the italicised font and use of all caps somewhat redundant. Labour has joined in the fun with its own slogan, “Jobs, Jobs, Jobs”, which has already been annexed by the Prime Minister, who closed Wednesday’s duel with Keir Starmer by saying: “Build, build, build, for jobs, jobs jobs!”

Similar eloquence is to be found in supposedly considered statements laying out policy. In his “BUILD, BUILD, BUILD” speech, Johnson declared: “We will double down on levelling up — if you can make sense of that.” It was generous of him to make the speech interactive. Then we have this, from a Twitter video for Johnson’s economic plan: “It’s about bouncing back, but also bouncing forward.” Stirring and Churchillian, I think you’ll agree. These lines are delivered with a relatively straight face, albeit with laughter in his eyes. But I think the coda, “if you can make sense of that”, while cloaked in self-deprecation, is a sign Johnson knows full well that what he is saying is gibberish.

No subject is spared this treatment. In the early weeks of the COVID-19 pandemic, Johnson described the curve he wanted to see on the graph of infections as a “sombrero”. This wasn’t a turn on a TV panel show, or one of his knockabout newspaper columns, but a televised address to the nation about a deadly virus. I submit that this cocktail of flippancy, laziness, and contempt (what are these “Bish, Bash, Bosh” slogans but an insult to our intelligence?) can be traced back to Johnson’s earlier incarnation as a Fleet Street opinionator.

What are the essential ingredients of a hack columnist? There are many, but in their right-wing populist version, I would say they might include:

You’ll recognise I think the hallmarks of Johnson’s political style, from his speeches to parliamentary debates to election campaigns. More insights are to be found in his conduct off the page. Johnson’s dishonesty and ruthless ambition while a journalist are infamous, and it’s fairly well known he was sacked from the Times for inventing a quote. But Johnson’s work practices also displayed utter contempt for his readers, and for everyone else.

Johnson’s biographer, Sonia Purnell, in her book Just Boris, has accounts from colleagues about his editorship of the Spectator in the late 90s. See if this rings any bells, in the context of Johnson’s “leadership” from City Hall to Downing Street: “His absences were thus regularly nail-biting and infuriating for the magazine’s staff. He would habitually not answer his phone, commission articles, turn up to lunches, or meet dignitaries, important advertisers or even his own deadlines.”

Purnell quotes Times columnist Matthew Parris, who says “Boris usually has a team of intensely loyal people around him who are carrying the can for him…” (The anguished face of Matt Hancock flashes to mind, like a put-upon bloodhound.) She also notes that Johnson “had a habit of making promises to contributors that he could not keep”, and: “When there was no escape from writing a piece he would typically leave it to the eleventh hour and then dash it off.”

So to his response to the pandemic. Taking into account his own illness, what have we seen in Johnson but the “Will this do?” premiership, with policy dashed off and filed just before (or weeks after) deadline? Then as now, Johnson made no exception for moments of intense gravity. You’ll have to read Purnell’s book for his response to 9/11. (It features the word “crikey”.) This week marked 25 years since the slaughter of Bosnian men and boys at Srebrenica. In a recently unearthed piece for the Ottowa Citizen in 1997, Johnson (then a Telegraph columnist) described Srebrenica as “what appears to have been the worst massacre on European soil since the Third Reich”. Yet he goes on to argue, in hindsight, that nothing should have been done, or even threatened to be done, to stop it. To ask whether Johnson still believes this is to miss the point: he had a column to file, and it had to be snappy and finished, whether or not it was coherent.

More recently, in 2013 Johnson compared Syria’s Bashar al-Assad to Adolf Hitler, remarking that “not even Hitler used chemical weapons against allied troops”. Several chemical attacks later, in March 2016, Johnson wrote a Telegraph column titled “Bravo for Assad — he is a vile tyrant but he has saved Palmyra from ISIL”. This piece contains the imperishable line, “The victory of Assad is a victory for archaeology”. I think you’ll agree both articles are sketchy work from a leader who likes to claim the mantle of Winston Churchill.

I notice that in Johnson’s latest column, written for an Israeli newspaper and translated in to Hebrew, the Fleet Street hack enlists his pen in the cause of Middle East peace — a sign that his career has perhaps moved beyond the reach of satire.

That such a person was ever mooted as a Conservative candidate for parliament is the original scandal, compounded by every subsequent elevation. His rise has delivered us into a world of “Spam, Spam, Spam” slogans and a mountain of needless Covid corpses. As we “bounce forward” in our new Hackocracy, all that’s left for Johnson’s humble readers to consider is this: if Johnson’s crimes against language are partly intended as jokes, at whose expense is the punchline?