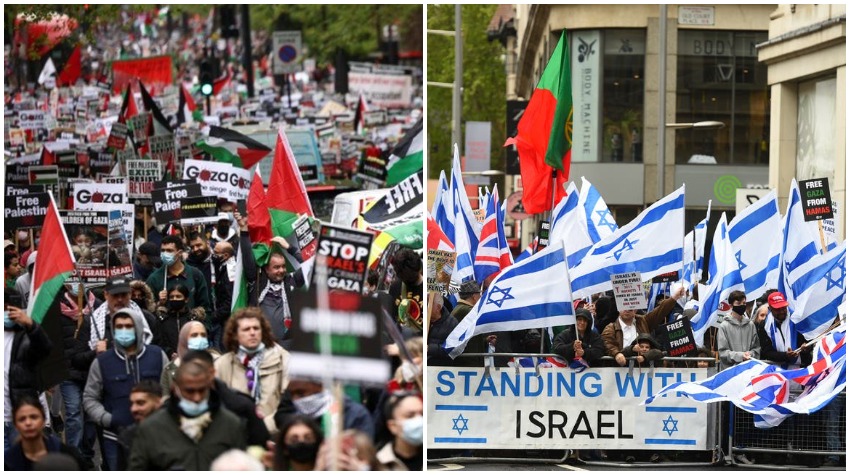 In his 1945 article on ‘The Sporting Spirit’, George Orwell wrote: “If you wanted to add to the vast fund of ill-will existing in the world at this moment, you could hardly do better than by a series of football matches between Jews and Arabs… [among other national rivalries]“.

A grim development in the years since – and one that has dogged the violence of the last fortnight – is the way the Israel-Palestine conflict has come to be treated by the outside world like a macabre football match.

Consider the way people wrap themselves in a uniform of scarves, flags and t-shirts as they flock to major cities to support their team. Notice the moronic and vaguely menacing slogans shouted in unison by otherwise intelligent and civilized people. Then there’s the outbreaks of hooliganism, as fans intimidate bystanders who lack their enthusiasm, and even attack people (for example, random Jews in London) suspected of sympathising with the rival team. Excuse me if I doubt that such behaviour is solely motivated by a concern for human rights.

This sort of identification blinds people to any consistent application of the rules: The referee is biased. It’s not a foul when we do it, and so on. (I’m always impressed when both “sides” are convinced the same media coverage is biased against them.) When we bomb civilians, it’s not a war crime, because we’re doing it in self-defence. To treat the conflict like a sport also assumes that contests like the violence of the last two weeks are, like football matches, part of a never-ending cycle. That was a tough match, but we’ll beat them next time.

Naturally this attitude means you won’t ask basic questions, such as “What makes this fight different from all other fights?” -  for example, whether this round was partly a way for politicians in Israel and Gaza to impress their local constituencies. (Prime Minister Netanyahu may face another election this year, while Hamas were set to compete in the long-delayed Palestinian elections, which President Abbas recently postponed.) As ever, superpatriots are the greatest enemies of their own country and people.

In case this sounds like a “both sides” analysis, (a charge, under the name “moral equivalence”, that was used to shut down dissent during the cold war, but which has become fashionable since President Trump’s Charlottesville speech), let us agree that a war in which one side has an air force and a missile defence system and the other does not, is not a fight between equal powers. The first side has more options, however ruthless its enemies.

To zoom out from the obvious, a recent B’Tselem report takes the bold step of considering the rights of Palestinians across the whole of the former British mandate, and finds a sort of Pax Judaica where Palestinians (whether Israeli citizens, permanent residents in East Jerusalem, those living in the West Bank, or those blockaded in Gaza) are all denied rights afforded to Israeli Jews. You don’t have to agree with B’Tselem’s decision to call this “apartheid” to recognise that these are conditions you or I, if we were Palestinian, would not consent to live under without protest.

So sharing memes online about Israel’s “right to defend itself” as it conducts airstrikes on a civilian-filled area the size of Sheffield, or any half-baked attempts to blame everything on Hamas as Palestinian families are evicted from their homes, simply will not do. Nor, of course, will pretending Hamas is irrelevant, or that anyone would fire thousands of rockets at civilians in pre-1967 Israel because they care about human rights, justice or international law.

Similarly unhelpful is having every Palestine solidarity protest in London co-organised by Muslim Brotherhood front groups like the Muslim Association of Britain, with a keynote speech by Jeremy Corbyn, the country’s most famous antisemite. I suppose it’s better to have no protests at all for the Uyghurs in China, the Rohingya in Burma, or against the wars in Syria and Yemen, than have them led by such riff raff.

As both the Israeli government and some Palestinians have claimed the ceasefire as a victory, (though I see police and protesters are already clashing at the Al Aqsa again) –  and as the Biden team scrambles to come up with a policy  –  those of us who have the luxury of being safely away from the fighting and misery should swap our flags for something more objective and humane.

Since neither Israeli Jews nor Palestinian Arabs are going anywhere (whatever the fever dreams of the bloodthirsty), they are going to have to find a way to live together  –  as neighbours, if not as friends. Any resolution will be a compromise no-one is entirely happy with. But history is not a football match where one side can achieve a clear victory. If we learn anything from the last two weeks (and I’m not holding my breath), it’s that the alternative to peace is a sick game in which everyone loses, forever.