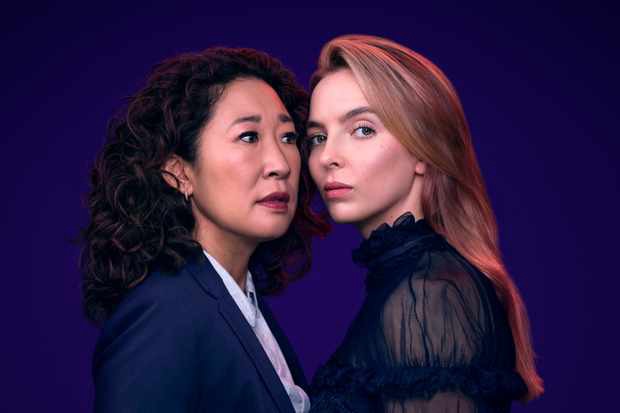 It’s worth pointing out, given the justified popularity of Killing Eve, that it succeeds despite its plot being preposterous. Both at the macro level of premise and the micro level of events, the hit BBC series is almost brazen in its testing of the viewer’s credulity.

The notion that MI6 would let a novice lead the hunt for a lethal Russian assassin for whom she has a major pash ought to draw scoffs from the least reflective viewer. It’s a testament to the show’s other virtues that no-one cares.

Season Two (available now on BBC iPlayer) takes these big asks of the audience to new heights. The assassin Villanelle’s (Jodie Comer) fatherly Russian handler Konstantin Vasiliev (Kim Bodina), who was fatally shot at the end of season one, is back from the dead, resurrected by his being too good on screen to lose. Eve Polastri (Sandra Oh) is back working for MI6 spy chief Carolyn Martins (Fiona Shaw) despite suspecting that she’s in bed with the enemy. Of course, everything about Killing Eve signals to the audience that we’re in a fictional world of comic exaggeration. (Why else would we let ourselves enjoy Villanelle’s murders, as if she were a dressed-to-kill Freddy Krueger?) But given the importance of the “boss” relationships in defining our leading ladies, these plotholes threaten the audience’s investment in the show’s greatest asset.

That asset is the characters of Eve and Villanelle, as written by Phoebe Waller-Bridge (sainted author of Fleabag) and as portrayed by Oh and Comer.

When people talk about Comer as Villanelle, they usually mention her mastery of a range of foreign accents. This reviewer is struck less by what Comer does with her voice than what she does with her face. Despite a relatively spare canvas of small features, porcelain cheeks and Disney eyes, Comer’s face is remarkably expressive and versatile. She renders everything perfectly — childish petulance, psychotic menace, girlish glee, muffled heartbreak — with the gifts of a silent film actor.

Sandra Oh’s face, by contrast, is more static. At rest she has a look of mild surprise, (rather living up to her surname). This makes it all the more impressive when she conveys so much through her eyes: fear, irony, anguish, defiance. It’s these performances that have made the show a hit, along with the writing.

I was surprised during the opening credits of an early episode to discover that someone other than Waller-Bridge had written it. I checked and found that Waller-Bridge has decided to delegate much of the script-writing for season two, and is listed instead as an executive producer. While the writing is more fluid and assured than season one, this is common to all shows, since in a show’s first season everyone is still working out what it is. But season two retains the charm and wit of Waller-Bridge’s writing. The characters are richly drawn, and their inner stories (or “arcs”, in telly-speak) have the kind of emotional truth that implies at least a hand on the wheel from the author of Fleabag. I’d be amazed if the jokes at the top and tail of scenes weren’t added by Waller-Bridge, since they are so in keeping with her sensibility. These moments lift the show and make it sparkle, throwing a chic cardigan over the plot’s ragged edges.

(Spoiler warning.) There are some amusing cameos. Julian Barratt (The Mighty Boosh, Nathan Barley) is fun as Villanelle’s doll-collecting creep and captor, while Adrian Scarborough (Gavin & Stacy) as the truly frightening Raymond is underused, (and occasionally calls to mind a sort of scary cousin to Barley’s Jonatton Yeah?.) These male villains provide moments of feminist catharsis, (Villanelle to Barratt’s character Julian, after he takes a knitting needle to the throat: “This is what you get!”). The way Villanelle puts tech jerk Aaron Hughes (Henry Lloyd-Hughes) out of our misery calls to mind Judith slaying Holofernes.

As we reach the last episode’s climax, (which takes a bit too long to arrive), the plot holes again threaten to spoil our enjoyment. (See if you can buy the way Raymond lets Eve dither behind him with an axe.) But we’re carried along by two stellar central performances, and by Waller-Bridge’s having drawn her female leads as full human beings, homicides and all.