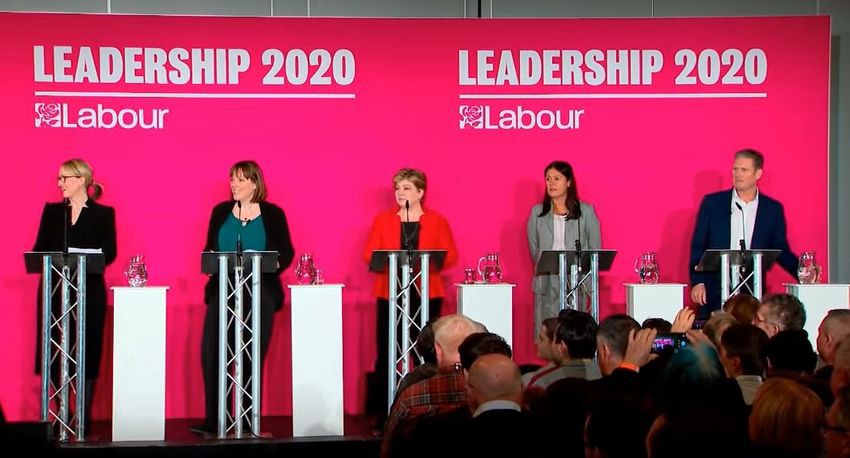 Labour candidates at the hustings. Image: Labour Party via YouTube

Amid the good humour of Labour’s first leadership hustings in Liverpool on Saturday, an unwanted guest stalked the proceedings and threatened to ruin the party: At the back of the hall in the Arena and Convention Centre, apparently undetected by the Labour members assembled, stood a large and somewhat morose-looking elephant.

Liam Thorp, political editor of the Liverpool Echo, set a jovial tone as chair. Yet at several occasions he betrayed a certain nervousness, perhaps brought on by the strain of having to ignore the big-eared mammal in the crowd.

The five candidates hoping to lead the country’s opposition are magnificent creatures in their own right. Heir apparent Rebecca Long-Bailey, (pony-tail, glasses), spoke repeatedly about something called “aspirational socialism”—a new formulation we’ll either be hearing endlessly or never again, depending on whether she wins. Long-Bailey said Labour needs to be “the salespeople for socialism”, her period of reflection having apparently skipped the question of whether the word “socialism” (or indeed, the politics of socialism) has helped or hurt Labour’s sales pitch.

The key word for centrist favourite Jess Phillips (high street casual) was “heart” — as in, We need a leader with “heart”, We have to speak to people’s “hearts”, and so on. For Phillips, “heart” consists of saying something windy and vague while sounding as if you’re about to cry, because you just care so much. This is quite effective, though after four times in an hour it starts to look like a trick.

Phillips did at least recognise the need to ask why people voted positively for Boris Johnson, and stressed the scale of Labour’s problems, crying in despair: “This is the fight of our lives, and we’re not even on the terrain.” At this the elephant shuffled a little closer to the podium.

No such sentimentalism from Emily Thornberry (power stance, scary headteacher), who has decided the way to mark herself out as a strong leader is to look and sound as if she’s about to deck someone. The person she wants to deck is the Prime Minister, who, as she kept reminding us, she often went “toe-to-toe” with at the dispatch box when he was foreign secretary. (Why Thornberry would want to remind us of Labour’s foreign policy under its current leader is one of the many mysteries of her campaign.)

Just don’t ask the Islington South MP and wife of a High Court judge whether she might be too posh and metropolitan to represent the working class. She boomed: “Clement Attlee was the best Prime Minister this country ever had, and where was he from? Lime‘ouse”. Thornberry’s dropping of the ‘h’ in Limehouse somehow emphasised rather than overcame her cut glass diction.

Yet most remarkable was the refusal of every one of the candidates to even acknowledge the grey beast at the side of the stage. No matter the question, (from how to deal with “factionalism” in the party to how Brexit would affect places like Liverpool), the candidates looked out into the crowd or down at their notes, as if determined to avoid eye contact with the elephant.

Things nearly changed when, after a question about anti-semitism, Lisa Nandy (very smart casual, concerned eyebrows) blamed “the collective failure of leadership at the top of this party” which “gave a green light to anti-semites that they were welcome”. Phillips seemed ready to go further, claiming to have raised anti-semitism in meetings with (unnamed) senior figures in the party “when others were keeping quiet”.

By now the neglected elephant had sauntered on to the podium, which began to buckle under its weight, prompting the candidates to hold on to their lecterns. When Keir Starmer (recent haircut, open collar) said that as leader he wanted every anti-semitism case “on his desk” to handle personally, there was a risk the stage would give way and send the candidates flying. After all, there must be some reason why this hadn’t happened before, and indeed couldn’t, given who was sitting in the leader’s chair…

But this turned out to be a false dawn. At one point, front-runner Starmer, in reflective mood, said: “Don’t trash the last Labour government. And don’t trash the last four years”. He went on to praise the current party leader for making Labour “the anti-austerity party”, before adding: “We can’t throw the baby out with the bathwater.” What the bathwater represents in this delightful metaphor we were left to guess.

One of the least attractive features of the current Labour regime has been its requiring good people to tell lies about it. There are, after all, honest answers to all the questions asked at Saturday’s hustings, but they involve a confrontation no candidate is willing to have. For all of the challenges raised at the hustings—left-wing fratricide, Brexit drift going back to the referendum, deservedly awful media coverage, anti-Jewish paranoia, losing the election—the reasons can be boiled down to two words, which together constitute the name of one man.

Labour’s leadership candidates may be hoping their “strategic ambiguity” about Jeremy Corbyn and his movement will win them a majority of Labour members, and that a subsequent regime change will cleanse the party of its current toxicity, without the need for a proper reckoning or explicit break with Corbyn’s reign of error.

But this cowardice is unlikely to impress the general public, who are looking for someone who will denounce Corbynism as a matter of principle, and as the first step towards fumigating the Labour brand. Instead, the would-be leaders of the party, and of the country, begin their contest by denying reality, and pretending they can’t see an elephant when it’s staring them in the face.