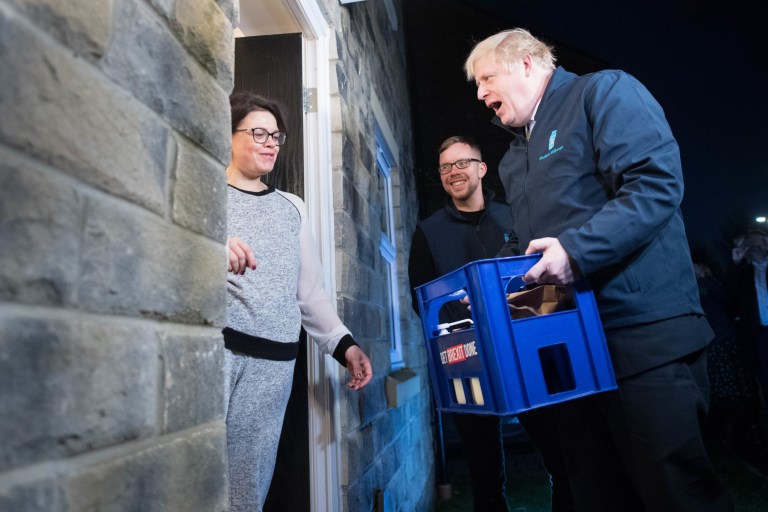 Boris Johnson during the 2019 general election. Image: CreativeCommons via Flickr

“All the promises will be broken.” — Bruce Springsteen, Thunder Road

Tis the season for national folly, as the electoral tradition of Labour and the Conservatives trying to bribe voters with their own money reaches new levels of populist insult. (Where exactly are they finding these tens of billions?) That these wild and incredible promises come at a time of Brexit-induced economic frailty, and are made by two of the shiftiest characters to ever lead a political party, ought to earn the contempt of any thinking voter.

Instead the polling numbers for Labour haven’t budged, while Conservative support has slightly increased. And anecdotal evidence from social media and audience members on the risible TV “debates” suggests that a significant chunk of the electorate actually believes what is being promised them. How, in an age supposedly marked by public suspicion about political “elites”, can this be?

Two reasons come to mind: The first is the ongoing failure of anyone to come up with a good response to a politician’s claim to be carrying out “the will of the people”. (Mine would begin with the question, “Which people?”, followed by some inquiries about how this singular “will” could possibly exist, let alone be known or measured free of manipulation.) So long as this claim has any force, and invites anything other than derision, politicians will be able to go on promising the impossible with relative impunity, even success.

The second, and more challenging, reason is the willingness of so many otherwise intelligent and reasonable people to believe such obvious claptrap. I’ve argued elsewhere that a healthy scepticism about the powerful can paradoxically slip into a happy credulity toward politicians who claim to be outsiders or against the status quo. It can also lead to paranoia and conspiracy-thinking, such as that the BBC (which ties itself in knots in pursuit of balance when it need only be objective) is actively working to destroy your favoured thing.

Thus people can believe that Brexit is a tedious catastrophe, not because of any inherent difficulty or fatal flaw in the project (e.g. that Britain can easily leave the EU and be better off as a result), but because of a plot by the judiciary, the BBC, parliament, the EU, and (why not?) George Soros. Or that the forces of capital and their allies in the media (wink) have invented or exaggerated an anti-Semitism problem in the Labour Party out of fear of Jeremy Corbyn. These are now widely-held opinions in a country known for its empiricism and common sense, not to say common decency. And in all cases, it’s those who imagine themselves to be cynical and wised-up who are the most eager to believe this utter bilge.

So as broadcast and print journalists cast around for an “issue” in this election (I see it’s the “Waspi women” this week) we might spend a little time on the role of faith in our politics. In particular, more critical and sceptical attention should be paid to the emergence of at least two quasi-religious revival movements in this country, Corbynism and Brexit. You can see them in action at the ecstatic meetings with their respective leaders (Corbyn and Farage) up and down the country, with their tales of a golden past and a radiant future, and their promise of a wiping away of the old world and a working together to build the new. (You see how easy it is to mimic the style.)

Watching the non-debates last week, Corbyn and Johnson resembled TV evangelists flogging salvation, and asking you to “send in your pledge today”. (Jo Swinson, meanwhile, remains so lightweight she could float.) And both movements have their True Believers, their zealous propagandists, and a larger group pooled from those desperate for a better life. (Only the latter deserve one’s sympathy, though this is best expressed by telling them the truth.)

As with all faith-based politics, Brexit and Corbynism each in different ways represent a threat to the freedoms and tolerance and prosperity we in this Sheltered Isle have taken for granted. And while I insist that the preachers (including the vanquished priesthood of the neoliberal consensus) bear chief responsibility, they would be ranting at speakers’ corner without a put-upon audience looking for meaning and purpose — a grand crusade and a source of hope.

This is why politicians can make incredible promises in this election. They do so safe in the knowledge that they have a ready-made excuse for breaking them — sabotage by the forces of darkness—and an army of morons ready to defend them in the name of a higher mission. If anything is to be salvaged from this farce, it would start with the humiliation and defeat of these hucksters and frauds at the hands of a heathen majority.